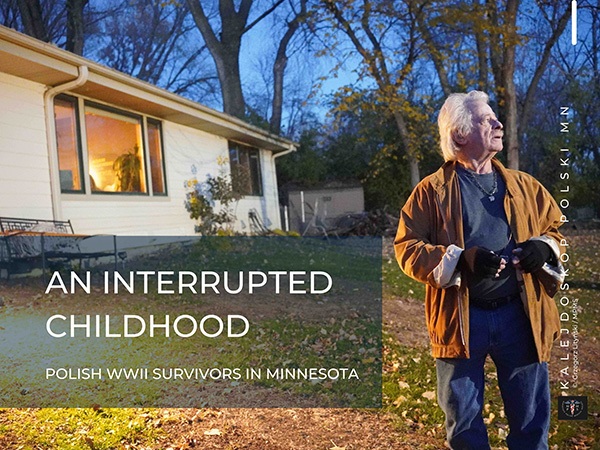 In partnership with the Minnesota Polish Medical Society, the East Side Freedom Library and the Roseville Library.

In conjunction with a photographic exhibition in Landmark Center, March 5-April 30, 2023

Three Polish survivors of WWII will share the stories of their experiences as refugees, and that of other Polish immigrants to Minnesota. In conjunction with the photo exhibition, “An Interrupted Childhood” shown at Landmark Center and at the Minnesota State Capitol, join us and learn the stories of Maria, Wiktor, and Adam, histories that shed light on the forgotten children of WWII. Adam Han-Gorski was the history witness.

If you have missed Part One of this program it will be available on the RCHS YouTube channel.

The stories of WWII survivors Adam, Anatol, Leonard, Magdalena, Maria, Walter, and Wiktor are part of the MPMS project An Interrupted Childhood: Polish WWII Survivors in Minnesota. During this phase of the Kalejdoskop Polski MN project, we collected the oral histories and photographs of Polish Minnesotans who have been through the horrors of the war: a forced laborer in the Third Reich, deportees to Siberia, a Polish Army Cadet, a Volhynia Massacre survivor, and a Holocaust survivor. These stories represent different fates of Poles during WWII and its aftermath. The collected narratives teach us lessons of suffering, survival, resilience, and gratitude are truly humbling and inspiring.

This two-part program and exhibition represents part two of the Kalejdoskop Polski MN project initiated in 2020 by the Minnesota Polish Medical Society that aims to document the stories of contemporary Polish immigrants and refugees who settled in Minnesota. The lead artist for Kalejdoskop Polski MN is Grzegorz Litynski, a professional documentary photographer (www.litynski.com). This body of work forms a traveling photographic exhibition. Katarzyna Litak curates the exhibition.

Maria was born in Tiutków, Poland (now Ukraine), in 1939. In June 1940, Maria was deported with her mother and brother by Soviet Security forces (NKVD) to a work camp in Siberia when she was 18 months old. She was separated from her mother during the deportation and stayed behind with her aunt. Tiutków (Ukrainian name: Тютьків, Tiutkiw) is a village in the Tarnopol region, around 100 miles southwest of Lviv. It is located in Volhynia and became a part of the Soviet Union in 1945. After the war, Maria was deported to Poland from the village where she grew up. It was now a part of the Soviet Union. She grew up behind the Iron Curtain. Therefore, she could not reunite with her mother and brother Anatol in the United States until March 1957, when she was 18

Wiktor was born in Warsaw in 1938. After the Germans and the Soviets jointly invaded Poland, Wiktor’s family moved out of Warsaw because Wiktor’s father was threatened with arrest by the Nazis. Wiktor spent the whole German occupation in a small village in eastern Poland. After the war, the family returned to Warsaw. Wiktor became a television documentary filmmaker. In 1980, he became involved in the Solidarity movement. After martial law was imposed in December 1981, he lost his job and was pushed out of the country by the communists with a one-way passport. Since 1983, Wiktor has lived with his family in Minnesota.

Adam was born to a Jewish family in Lwów, Poland (now Ukraine), in 1940. Adam survived ghettos in Jaworów and Kraków and was saved by his Polish nanny Katarzyna. At age five, he reunited with his parents, who survived the Holocaust. After the war, the family was forcibly relocated from Lwów, which became part of the Soviet Union, to Upper Silesia, Poland. Later Adam lived in Israel, Austria, Germany, and the United States. Adam became a renowned violinist and a concertmaster who performed with many orchestras worldwide, including the Minnesota Orchestra.

Katarzyna Litak, MD, is MPMS President, Kalejdoskop Polski, MN project manager, exhibition designer, and curator. She conducted oral interviews for the project. Originally from Poland, she continued medical training at the University of Minnesota. She is also a practicing physician.